Software prototyping – why is it important?

Using a software prototype offers many benefits for software development and can help minimise miscommunication between developers and users. Clients and developers use software prototyping to ensure a project’s requirements are fully understood and met during the work process. However, many projects often overlook adding prototyping to the process. It’s a critical part of any bespoke software project to locate and reduce errors and issues before it’s too late.

Here we share some of the top benefits of adding software prototyping to a custom software development project.

When a project is underway, errors can cause significant setbacks. Missed deadlines and failed projects could be the result when not identified early on in the process. A prototype helps the developers and clients create an idea of what the final product will look like upfront, which can then create a realistic timeframe for milestones and completion.

This allows software development companies to make promises to users that are easier to stick to, avoiding customer dissatisfaction in the process. Using a software prototype minimizes development risks and makes deadlines more likely to be met on time.

Prototyping increases satisfaction for both the stakeholders and product owner. As a working environment that allows revisions through the process is created. Prototypes also help developers increase effectiveness and allow them to discuss issues surrounding implementation before coding begins.

Establish requirements at the start of the project

Any good development process will start by establishing requirements for the project ahead of time. This allows teams to all be on the same page from the very start of the project, minimising the chance of confusion down the line. When teams don’t fully comprehend the project requirements, this can result in disaster further on in the process.

A prototype allows the entire team to see what the application will look and feel like to users. This helps them to understand the requirements better, saving time and money in the long run by avoiding miscommunication. It can also help boost the enthusiasm teams feel for the project, as they know what they are working towards in the long run.

While prototyping is generally used to improve the process, a by-product of this is an increase in team morale. Allowing team members to use a prototype gives them a stronger understanding of what they are working towards. Stakeholders can also see from the start what the project aim is.  This allows them to be more supportive and enthusiastic about the project. A prototype doesn’t involve as much work as often thought, so there is no reason to skip this stage.

As mentioned, a prototype doesn’t need to involve extensive coding to serve its function. It allows teams to unleash their creative skills and design anything they like at the start of the process. This can increase motivation and creativity within individuals, and many developers thrive during this task.

You’ll find that in the long run, it boosts creativity and increases productivity in teams. A prototype can make teams know where they need to spend their time and effort during a project, regardless of how quick or simple the prototype was to create.

From the beginning of a project, prototyping can give developers a firm idea of what they are creating. By creating a design that everyone then approves, less time will be spent considering the project’s design elements and details. This allows teams to go into the project with a clear focus which reduces errors and mistakes.

Reworking projects can be one of the most frustrating parts of a development process. The implementation of a software prototype minimizes the need for reworking. This can reduce costs and effort levels for teams and ensures the project is more likely to stay on schedule.

Prototyping gives teams a chance to create a product that is focused on the end-user from the start of the process. By creating a product that meets their expectations early on, you are more likely to experience happy users. Show the prototype to potential users and product owners to receive feedback fo5r areas of improvement.

Finally, one of the most important reasons for creating a prototype is increasing its usability. Developers have the chance to work through a whole series of potential situations and ways of using the software at the very start of the process.

This can shine a light on any areas that need attention instead of waiting until the end to find usability issues. Developers will experience less frustration, as they will spend less time throughout the process having to adjust their work.

Where to from here

There are many reasons to consider using software prototyping in each of your future projects. It brings about many benefits to developers, end-users, and stakeholders and can reduce frustration surrounding expected delivery dates and usability. You’ll find developers are more motivated and have a clearer idea of what they are working towards. The great thing about software prototyping is that there are many ways to create a prototype that doesn’t involve coding. With minimal effort, your BSPOKE Software will be able to put together a prototype for your next project to give your team time to assess any issues before it’s too late. 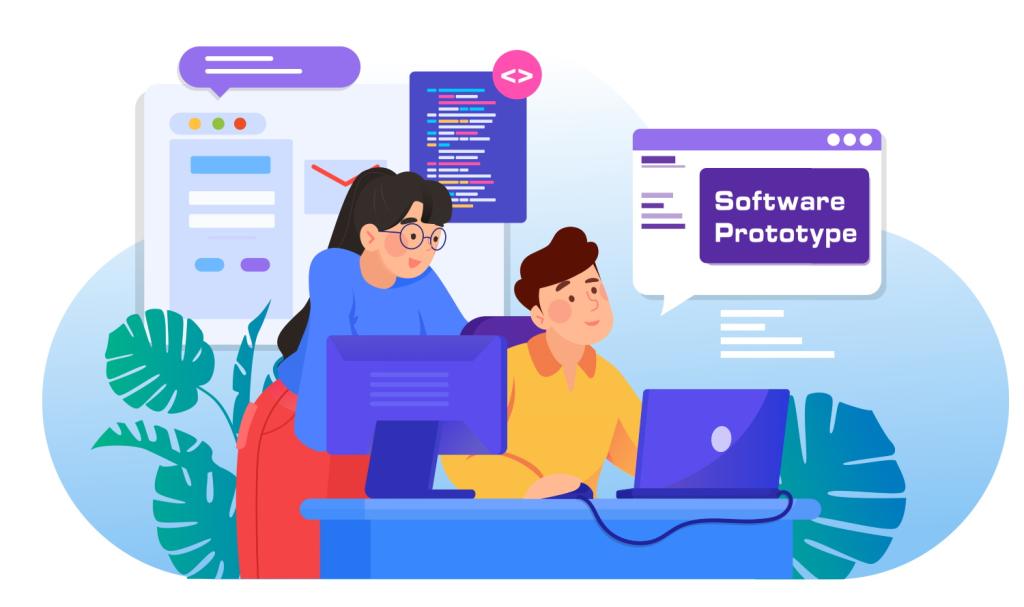