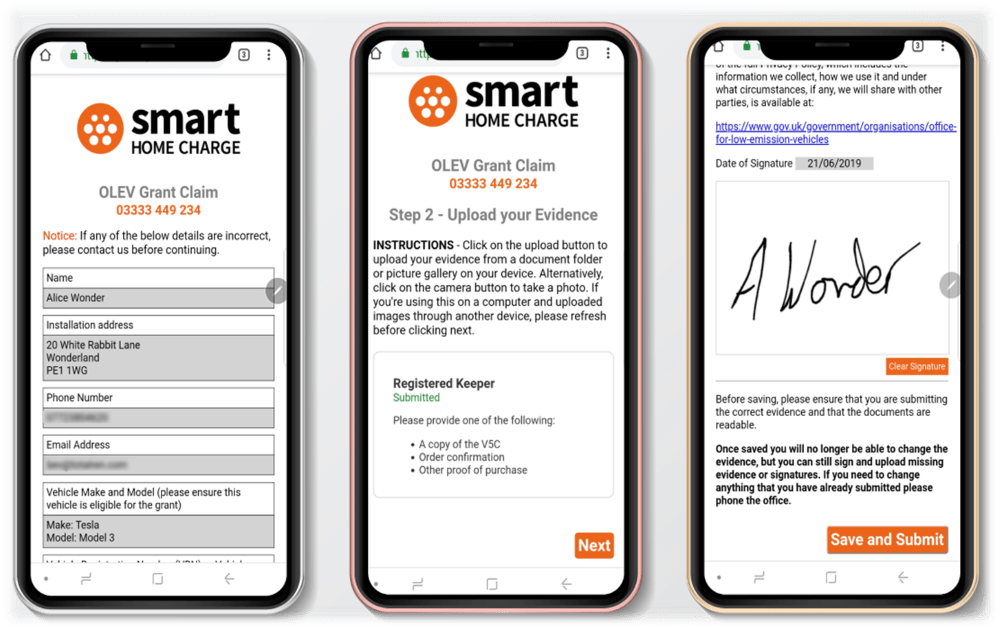 The main changes to the existing system was a rebranding that ensured that all emails, documentation and texts that customers usually see were branded in the correct way. For standard repairs, the usual branding would be used, but for electrical vehicle charger installations, the Smart Home Charge branding would be used instead.

A new section was added so that staff could fill in all the OLEV grant details on behalf of the customer, add the installation details gathered from technicians, and send system generated DNO notification to the relevant electric network operators.

At the end of the month, the system generates all the claims forms, collates these into folders per claim along with all evidence for that claim, and then generates the bulk installer submission. All is then added to a single folder and zipped up ready for submission to the OLEV Grant portal.

For customers, a mobile-friendly web portal was added so they could easily check over the completed grant form, sign in ‘wet ink’ directly on the webpage and upload their evidence with just a few button clicks.

Prior to delivering the new electric charger installation features, staff and customers were following a manual process for submitting and completing the grant application forms.

After the new sections were created, office staff found that completing the OLEV Grant form via the app was both clear and simple. Photos taken by technicians were instantly pulled through to the claim, so they no longer had to collect these manually. The monthly submission was mainly automated, saving the office staff hours of time.

Customers benefited most as they could now sign their application and upload their proof via a single webpage. Previously, it had involved an email chain between themselves and the office in order to do this.

As a result, overall production increased as staff were able to schedule and monitor orders much more efficiently in the office. The touch-screen terminal interface software made it easier for operatives to update what had been produced. Warehouse staff found they no longer had to redo work which had been a frequent problem when wi-fi was not available under their old system.

If you’d like the same kind of custom software for your company, click here. For more advice on how businesses such as this one can benefit from new ideas and technologies, visit our news page here.